This long-awaited move was expected to be lapped up by the residential societies at the first instance. However, this does not seem to be the case because of the ambiguity on who will foot the bill. This ambiguity is more in societies where the RWAs have taken over partial maintenance from the private developer and the ones that are facing insolvency proceedings.

To get a connection, housing societies need to pay around Rs 3-4 lakh to GMDA as the basic fee. Apart from this amount, cost will also have to be incurred for laying pipelines and related infrastructure from the society till the master line.

Amit Shekhar, RWA vice-president of Vipul Lavanya Sector 81, said, “There is no money with the RWA and the developer is not ready to apply for the connection and bear the cost involved in laying the pipeline. The authorities need to make it mandatory for builders to get the water connection as we have already paid external and internal development charges (EDC & IDC) to the developer.”

However, the representative of the developer maintained that they have already submitted the application for water connection with the GMDA.

The same is the case with several other societies. In fact, some private developers have not even deposited the EDC with the government and GMDA officials are very clear that till the time the complete EDC is not deposited, they will not provide a water connection. “We have sought clarity from the developer on whether or not he has applied for the water connection, knowing the fact that he has not deposited EDC with the government. Even if we wish to apply for the connection on behalf of the RWA, we cannot do so, because of the pending EDC,” said a resident of a society in Sector 83. 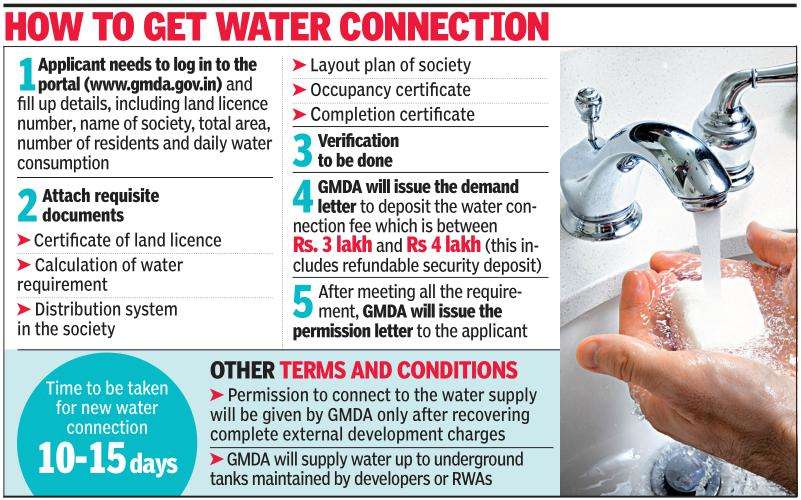 In cases where the society is under insolvency proceedings, the interim resolution professional has been entrusted with the task of getting the water connection. “Since our project is facing insolvency proceedings, we have asked our RWA to facilitate the water connection with the GMDA, through the IRP,” said Praveen Malik, a resident of Sare Homes, Sector 92. In some societies, the process to get a water connection is likely to get further delayed due to ongoing legal tussles between the RWA and the developer.

Pradeep Kumar, chief engineer of GMDA, said, “In case we receive any concerns from the RWAs, we will take up it with the authorities concerned.” According to the GMDA, it would take around two weeks to provide the water connection after applications are submitted for approval. So far, it has received only two applications.