Skip to content
VISAKHAPATNAM: In a first step towards preparing a slum upgradation action plan, the Greater Visakhapatnam Municipal Corporation has decided to launch a two-day survey to understand the infrastructural matrix in slums.

The survey, which would be held on July 11 and July 12, would aggregate data pertaining to slum dwellers, geographical precincts of each slum, access to services, social infrastructure, and key issues and challenges.

As per the initial estimates, there are 793 slums in Vizag, including 426 notified and 367 non-notified slums. About six lakh people live in these slums. The civic body conducted an orientation programme for ward secretaries over a two-day survey on Friday. The GVMC has formed 793 teams for the survey.

As per the city development plan prepared by the GVMC about a decade ago, the Visakhapatnam slum improvement project, implemented with £9 million grant funding from the DFID, UK during 1988-1996, improved the service provision for about two lakh slum residents in the city. This slum upgrading initiative was evaluated as a successful one within its specified objectives. However, it only worked in ‘notified’ slums of the city.

Later, the GVMC took up various initiatives to improve infrastructure and livelihood of slum dwellers under several government schemes. However, the fruits of these initiatives did not reach everyone. 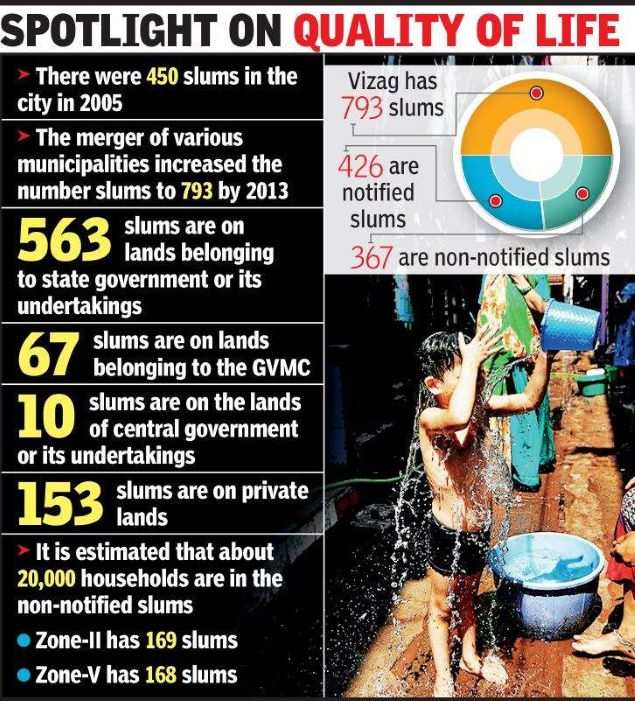 It is estimated that a majority of these slums sprang up on GVMC and government lands. Categorisation of some slums as ‘objectionable’ was based on the location and land use such as: on riverbeds, low lying areas, drains, road margins, etc. Slum settlements have multiplied over the decades in the city. But the living conditions of the poor have not improved.

GVMC mayor G Hari Venkata Kumari said the state government is determined to make Vizag a slum-free city. “Based on the survey data, the GVMC would identify both notified and non-notified slums and prepare development plans. The non-notified slums would be accorded legal status through a notification. The slum dwellers would be conferred with legal rights over the land. We are planning to distribute pattas through the hands of chief minister Y S Jagan Mohan Reddy in August,” said Venkata Kumari.

GVMC commissioner G Srijana said civic body staff would visit each household in the slums and aggregate data. “The GVMC is conducting the survey to completely change the face of the slums. Local corporators and residential welfare associations and others should cooperate with the staff,” said Srijana.