Skip to content
VISAKHAPATNAM: The draft master plan-2041 of Visakhapatnam Metropolitan Region Development Authority (VMRDA) has projected that about 36,000 hectares of land would be required to meet future residential demand.

This has been estimated based on the assumption that housing demand in the region would increase to 17.94 dwelling units by 2041. The demand estimates also considered 40% of the land required for developing necessary facilities and services, including community facilities.

Considering the upcoming transit-oriented development corridors with the proposed Bhogapuram airport and metro rail network, layouts, gated community and high-end housing has been suggested for the Vizianagaram peripheral areas and Visakhapatnam expansion areas. As per the draft plan, townships can be proposed in and around industrial clusters such as Atchutapuram, Nakkapalli, Kothavalasa, etc.

Slum rehabilitation can apply to Anandapuram, Pendurthi and Sabbavaram areas in a phased manner due to its regional connectivity and strategic location. The VMRDA is forecasted to have a population of 73 lakh by the horizon year. The urban development area would increase to 33% from the existing 15%. However, 43% of VMRDA region would be protected or retained as agricultural lands.

As per the development proposals, the residential areas and townships have to be developed with an idea of new urbanism and liveable communities where adequate public transport connectivity, social infrastructure, open spaces, etc. are provided. The urban growth areas will contain the future residential areas for the majority of the four million additional population by 2041. 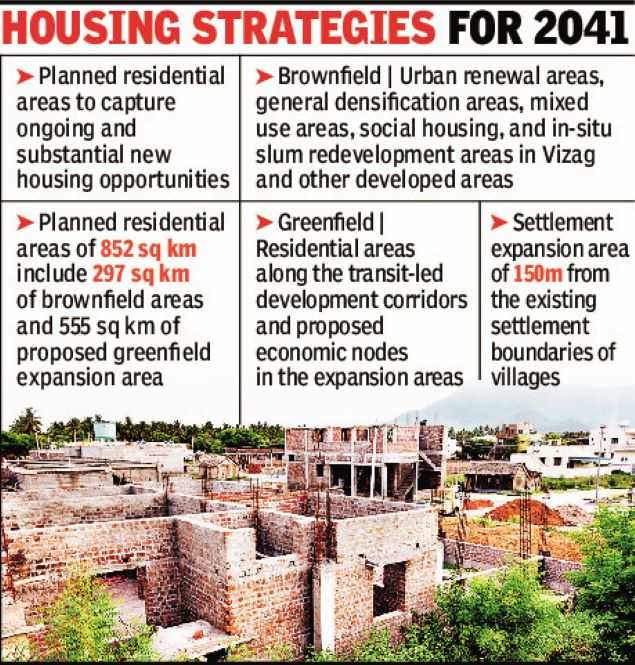 The majority of the area in VMRDA currently comes under rural character. Visakhapatnam is the major city, while Vizianagaram has comparatively less built-up area. Though there is abundant available land for urban growth, it is intended to restrict the growth within delineated future expansion area to have a compact development along the transit corridors.