Skip to content
MUMBAI: The delayed, underground Mumbai Metro 3 project from Cuffe Parade to Seepz is now staring at a major cash crunch. The reason—the indecisiveness of the state government.

On February 17, 2021, Japanese ambassador to India, Suzuki Satoshi, wrote to chief minister Uddhav Thackeray, expressing fears of an impending “cash crunch” and “significant delay or stagnation” for the project.

Satoshi’s letter, accessed by TOI, requested the CM to approve the revised project cost for the fourth tranche of the loan so that the Japan International Cooperation Agency (JICA), which is funding the metro, can release the money.

“…your approval… is required as soon as possible, at the latest by the end of this week, to avoid shortage of cash in the Mumbai Metro Rail Corporation Ltd (MMRCL),” it said.

TOI has learnt that four months later, the state government has failed to give its approval even as the project cost has escalated from Rs 23,136 crore to Rs 33,406 crore.

The chief minister’s office refused to comment, but a senior state official told TOI any decision is unlikely to be taken by the state government till the issue of the Metro 3 car shed is resolved in the high court. A MMRCL spokesperson too chose not to comment. 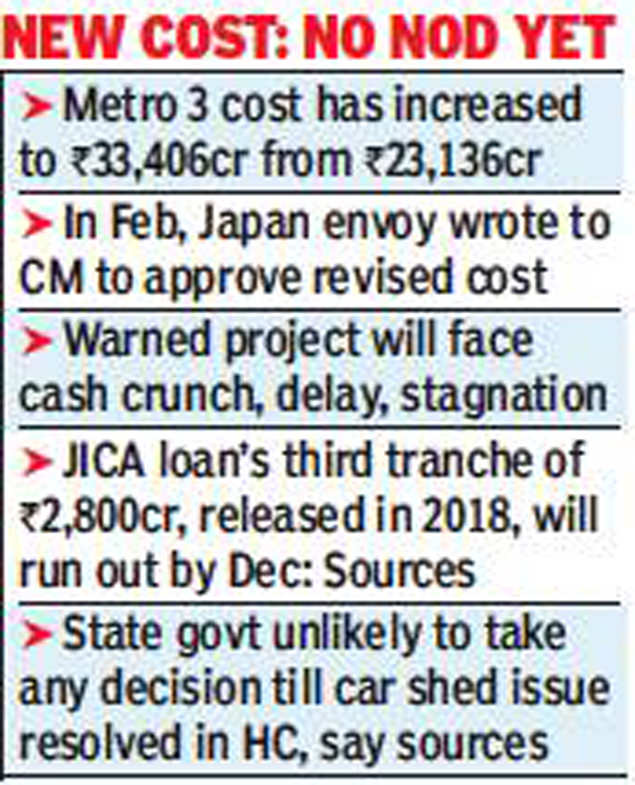 Last December, Bombay high court stayed the suburban collector’s decision to hand over the Kanjurmarg plot for the car shed. “Since then, there has been virtually no initiative on the part of state agencies to vacate the stay,” said government sources.

Since 2013, JICA has disbursed roughly Rs 13,425 crore in three tranches for the Metro 3 project. “The JICA’s last tranche of Rs 2,800 crore disbursed in 2018 will run out by December,” highly placed sources told this newspaper. “The Japanese agency has agreed to disburse an additional Rs 6,500 crore, but it is awaiting the state’s approval for it,” they said.

The protocol is that the state must first approve the cost escalation proposal and convey its decision to the union ministry of housing and urban affairs. Once the Centre clears it, JICA disburses the loan.

The delay in the completion of the underground Metro has both financial and social implications for a city that is in desperate need of better infrastructure for public transport. The north-south line will provide commuters an alternative to crowded local trains and take a huge chunk of traffic off the roads. The state must find a way to end the legal impasse over the Kanjurmarg land and get the last mile of the project expedited.Times View

“JICA stands ready to consider another loan to support the construction of the depot when the issue of its location is resolved,” said the letter.

A two-page annex note attached to the ambassador’s letter said the approval of the revision of the total project cost reflecting actual fund requirements is “indispensable” for MMRCL. 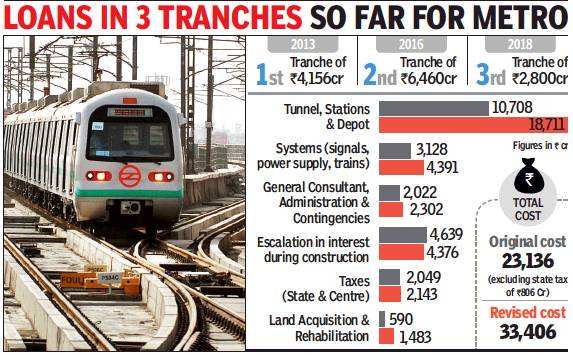 “During JICA’s detailed fact finding mission with MMRCL, conducted from December 2020 to January 2021, it was recognized that there is a real possibility for MMRCL to face fund shortage within the next fiscal year (FY2021) if additional loan cannot be provided by end of this fiscal (FY2020),” it said.

“As a financer of this project, the government of Japan and JICA are strongly concerned that the project would potentially face serious difficulties such as significant delays or stagnation, unless the loan is extended in a timely manner,” said the ambassador’s annex note.

MMRCL, the project implementing authority for the 33.5 km Metro 3 line, has already spent Rs 18,000 crore on the project. About 70% of the work including 95% of tunneling is complete. Though the metro car shed comprises barely 4% of the work, the project cannot be commissioned without it.