NEW DELHI: Almost a year after the government announced the Affordable Rental Housing Complex (ARHC) scheme for migrant workers in cities, only 1,703 such flats have been allotted in Chandigarh.

Five states of Madhya Pradesh, Gujarat, Rajasthan, Himachal Pradesh and Uttarakhand are at an advanced stage for renting out existing 5,100 government-funded houses, according to government data.

More than half of these houses which are being converted into AHRC under public private partnership (PPP) are in Gujarat alone.

The government had last year identified nearly 88,000 such houses which could be rented out to migrant workers. The massive exercise was carried out when a large number of migrant workers left for their native places.

According to the official data of the housing and urban affairs ministry, 31 states and UTs have signed the memorandum of agreements (MoAs) with it. 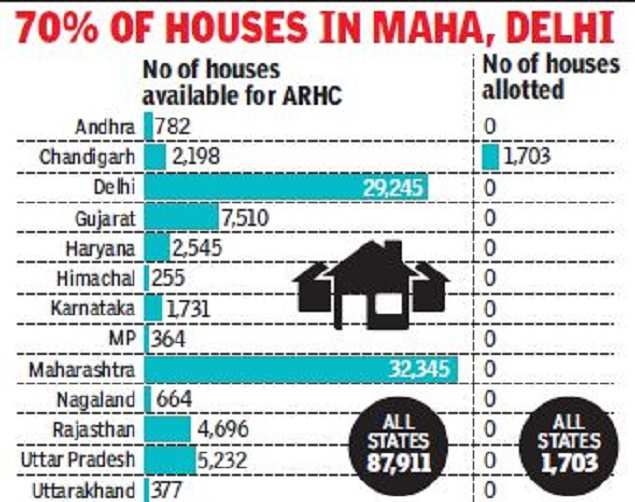 Sources said that it takes time for converting identified houses to ARHC as state governments need to engage a private player or a public entity to carry out repair and maintenance of such complexes. These entities are allowed to recover the investment from rental at a rate notified by the local authority concerned.

The second component of the scheme is to bring in private players to build such complexes and rent them out as per the norms set by the government.

The government has come out with several incentives to attract private investment in this sector. The housing ministry had recently invited proposals from private and public entities to set up such complexes on vacant land.