Skip to content
CHANDIGARH: The Chandigarh Housing Board (CHB) on Monday approved the extension of deadline for regularisation of need-based changes to December 31.

The decision was taken in the board of directors meeting held under the chairmanship of UT adviser Manoj Parida, who is also holding the charge of CHB chairman.

Recently, the CHB had proposed to extend the deadline after it expired on December 31, 2020. The proposal went to the administration for approval, but the authority had asked the CHB to decide. The CHB officials then placed the agenda in Monday’s meeting.

Parida said, “The penalty scheme to allow additional time to remove, rectify and regularise the building violations which had expired on December 31, 2020, is now extended up to December 31, subject to payment of applicable charges.”

The CHB has already ruled that the changes carried out in the flats by the allottees, which do not meet the criteria fixed by the administration in their notification of need-based changes, will still be termed as violations. The board had asked allottees to apply for regularisation after paying some charges. 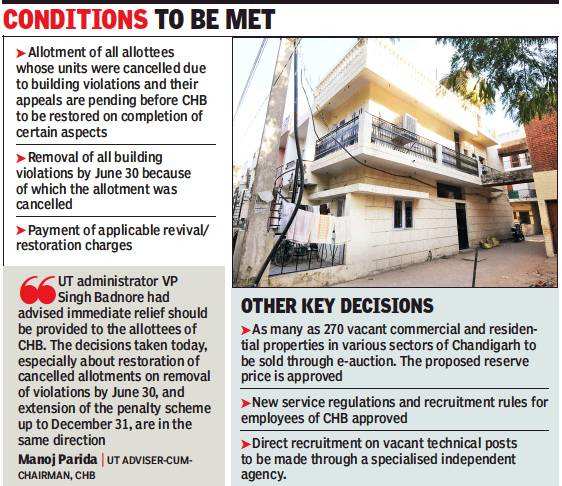 The administration has also clarified that additional constructions in the dwelling units of CHB flats are given temporary exemption from immediate demolition, subject to payment of penal charges.

Over the years, residents of 50,000 CHB flats have made need-based changes. However, the administration had not regularised these changes and had issued notices to most of the allottees, who are demanding their regularisation.