Skip to content
GURUGRAM: The mismatch between construction and money collected by developers from buyers has emerged as the biggest area of concern in the affordable housing segment. This is because unlike regular group housing projects where payment is linked to the status of construction, investment is time-bound in the affordable segment. And because of this, a number of developers have collected more than 50-60% of the entire amount but construction is yet to start at their project sites.

Flooded with such complaints, the department of town and country planning (DTCP) is considering making an amendment to the affordable housing policy of the state to link the payment with the status of construction. In some cases, the department has already directed developers to stop collecting payment from buyers unless they exhibit the development in construction work proportion to the amount collected from investors.

Currently, homebuyers in the affordable housing segment have to make 5% payment at the time of applying for the flat, another 20% at the time of allotment, and the remaining 75% is to be paid in six monthly instalments over the next four years. “I booked a flat in OSD Golf Heights in Sector 69 in 2018 and till March 2020 made more than 50% of the payment. However, at the project site, there has been barely any construction, despite a 2022 deadline. DTCP has now barred the developer from accepting any more payments,” said Gaurav Narang, a buyer.

In fact, a survey by DTCP has revealed that the pace of construction at many affordable housing project sites in Gurugram is slow. However, the developers have been taking payments from the allottees regularly. In some cases, developers have collected upto 65% of the entire amount. Usually, developers start construction at the site after obtaining environment clearance or the approval of the building plan that often takes up to a year. 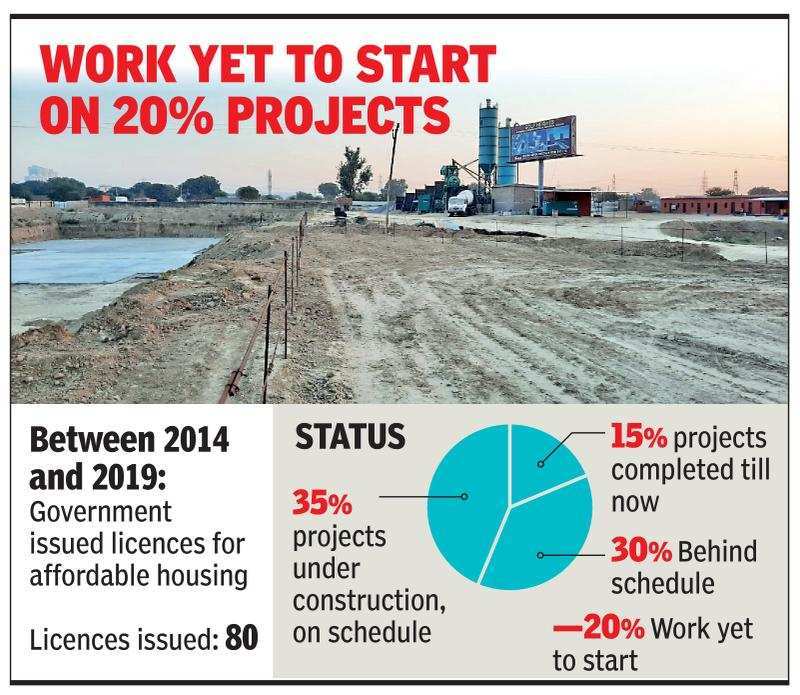 “So, we have made a request to the director of the town and country planning for making an amendment to the policy to make it construction linked,” said senior town planner (STP) Sanjeev Mann.

Chairman of Signature Global, Pradeep Aggarwal, however, said that the delay is caused due to two reasons – fundamental problems and developer-specific problems. “In 2019, on the direction of NGT, construction was stopped between October and December. This year, Covid-induced lockdown disrupted the construction activities for six months,” he said.

“Moreover, the cost of construction materials increases over the years, but the cost of units remains unchanged as the government has fixed the price. Getting an extension of licence is also expensive in the affordable segment. So, the delay will not benefit the developers of affordable housing,” he added.