Skip to content
NEW DELHI: Along the Najafgarh drain, the last remaining farmlands of Roshanpura are being divided into 50-100 square yard spaces by narrow lanes. On its way to becoming the world’s biggest urban agglomeration by 2028, Delhi is fast losing its rural periphery, like at Roshanpura.

And while, 1,731 unapproved residential areas are now in the list of regular colonies, the massive demand-supply gap in low-income housing and rapid migration continue to force the creation of informal housing localities.

Villagers blame the lack of economic opportunities and builder-politician-bureaucratic nexus for the mushrooming of informal inhabitations. Parsuram, 74, the last pradhan of Roshanpura before panchayats were abolished in 1989, testifies to open agricultural spaces turning into ‘kachchi’ colonies right before his eyes.

“Whenever a farmer requires money for family marriages, medical expenses or other needs, he sells his land to property developers who divide it into plots and sell them,” he said. “What earlier happened at night, now happens in broad daylight.”

Parsuram’s 16 acres — among the last remaining farmlands in Roshanpura — is hemmed in by concrete structures on all sides. “The vegetables I grow brings in Rs 40,000 per acre, but not all farmlands can sustain families,” the septuagenarian mused, noting that unapproved urban expansion could be stopped if the local administration and police stepped in. 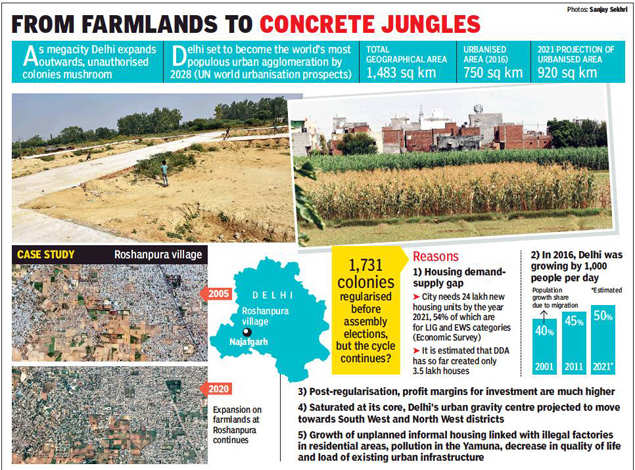 In Papravat village a few kilometres away, the same pattern is visible. Paras Tyagi, who runs the Centre for Youth Culture Law and Environment, which deals with issues related to Delhi’s villages, claimed that land records of Papravat show that half of the village’s 1,000 acres have been sold, most of them to third party colony developers. “Agriculture land in Papravat comes under the land-pooling policy, but if land is converted into unplanned colonies, what will remain for development land-pooling?” Tyagi asked. Colonies cropping up on agricultural land has also been noted in Dhichaun Kalan, Lampur and Malikpur villages.

Delhi adds more than 1,000 people to its migrant population each day, but there is no low-cost housing for them. In 2001, the proportion of migrants in the population growth of Delhi was 40%, rising 45% in 2011 and expected to cross 50% by 2021. Studies project urban land gravity centres moving to North-West and South-West districts, both of which have space in the form of agricultural land.

Pradeep Dagar, 41, a farmer in Dhansa village abutting the Jhajjar border, rued that the city had left them behind. “Even as Delhi prepares the Master Plan for 2041, the provisions of MPD 2021 haven’t been fully implemented for us,” he grumbled. “Why can’t we get the benefit of land pooling? Why do banks deny us loans despite our having clear titles to our land?” Villagers confide that lack of access to bank credit leaves them vulnerable to property dealers. “Once sold, construction takes place on the plot at night, and within a week a housing colony is a fait accompli,” alleged Dagar.

According to the projections of the 2019 economic survey of Delhi, the city needs 24 lakh new housing units by 2021, 54% of these in the low-income category. Of these, Delhi Development Authority has built only an estimated 3.5 lakh units. AK Jain, former planning commissioner of DDA and architect of MPD 2021, accused the government of encouraging unauthorised colonies by giving house owners ownership rights. “The profit margin for owners on regularisation of these colonies is huge, much more than formal properties,” Jain pointed out, citing Jamia Nagar, Sainik Farms and Mahendru Enclave as examples of well-to-do people using this route to double their investment in three years.

While Tyagi said Delhi needed policy changes like the central Swamitwa scheme to update rural land records and the abolition of lal dora provisions, a revenue department official claimed that in 2015, a special task force was constituted to check illegal land activities and two weekly drives are conducted. In fact, he revealed, last month one inspection team was attacked by the locals of Surakhpur Road, with several municipal staff requiring hospitalisation.

The official explained that the revenue department could only carry out demolitions, but prosecution was the responsibility of the land-owning agencies. To stop the cat-and-mouse game of illegal colony developers, the official said “villages have to be demarcated and fenced off, prosecutions initiated and steps taken to meet housing needs”.